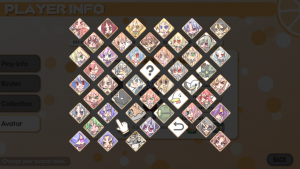 Character Selection screen as of update 1.26.1.

This page contains the list of all Characters included in 100% Orange Juice. There are currently a total of 45 playable characters (47 overall total, excluding different forms).

One of the Starter Characters is chosen at the start of the player's save file. The others can be unlocked by clearing their starting character's scenario, and then buying them in the Shop.

Unlockable characters are displayed as "Coming Soon" in the Shop after beating certain Campaign episodes, and then become available for purchase after completing any 3 other episodes.

DLC Characters are unlocked by buying them on Steam with real money.

Bonus Characters are unlocked by owning the said game on Steam that is listed under the 'Origin' column.

Starting at Level 6, playable versions of the enemies will become available in the Shop, although the Bosses will have reduced stats.

These characters are normally unplayable. They start appearing on Encounter panels once a player reaches Level 4, or by using certain cards, such as Oh My Friend and Overseer.

All Characters Event allows players to use any character even if they don't own them or have them unlocked.