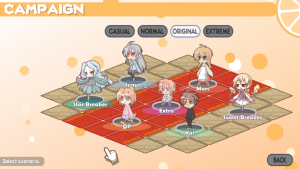 The Campaign's scenario selection screen as of update 1.20.

The Campaign serves as 100% Orange Juice's story mode. It can be found in the main menu of the game. Most unlockables can be obtained by finishing the Campaign.

Each Starter Character has their own scenario, but the player only starts with their starting character's scenario. In order to progress, the player must clear the given episodes by winning the match. The other scenarios, including the DLC ones, are unlocked once the player's starting character scenario has been completed. Each episode uses different Fields, Field Events, and Characters.

There are a total of 8 scenarios in the Campaign, most of which have 6 episodes (the Extra Scenario has 7 episodes, while the Girl Power Scenario has 10 episodes).

There are 4 types of difficulties in the Campaign. These affects how the CPUs perform during the game:

Here's the list of all the scenarios in the game:

For a quick table view of which are unlocked for completing the Campaign scenarios, see Campaign/Unlock Tree

Players can unlock rewards for completing the Campaign scenarios and episodes. These are but not limited to: Unlockable Characters, Fields, Cosmetics, and Steam Achievements.